Analysis from the Office of National Statistics (ONS) has shown that not only is there a difference between dreams and reality, this difference is sizeable.

By comparing the ambitions of those aged 16 to 21 in 2011 with the current occupations of 22 to 29-year-olds the ONS has found a reality gap with what really happened to their lives six years later.

While the variety of available jobs has grown with the advent of digital technology, it seems the jobs that young people aspire to has not changed. Their ambitions were for a mix of glamorous and creative jobs, such as actors or in film or television, and jobs where they might help the public, such as a range of health service jobs or in the police or emergency services. In 2015 to 2016 the top five jobs that 16 to 21-year-olds wanted to do when they were older was unchanged from the top five jobs being sought by the same age group in 2010 to 2011.

Aside from young people who aimed to go into teaching, less than one in 50 were in the career they had wanted – with most working as sales assistants, carers or in sales and marketing.

These findings align with earlier work carried out by Education and Employers in our 2013 report Nothing in Common. The report asked a simple question: is there any alignment between the career aspirations of young people, aged between 15 and 16, and the best estimates of actual demand within the current and future workforce?

Drawing on a survey of over 11,000 young people, the authors mapped teenage aspirations with projected labour market demand  from the Working Futures 2010 –
2020 project (some 13.5 million jobs in total). The report found that there was effectively ‘nothing in common’ between the aspirations of teenagers and the jobs that await them when they transition from school to work. In doing so, it raised concern about the massive information gap between what young people know about the careers and opportunities open to them and the actual jobs that exist. 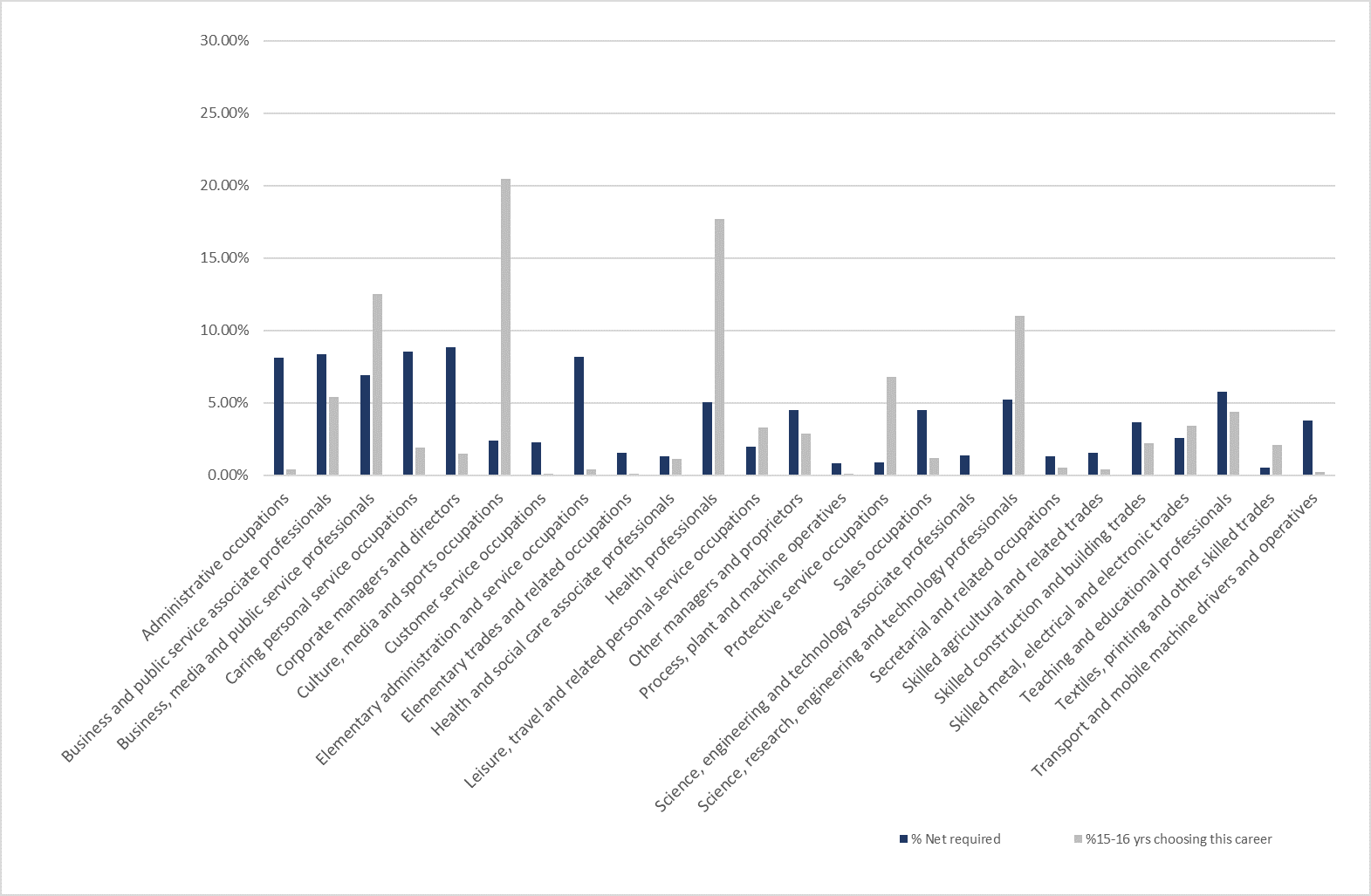 Source: Nothing in Common

Earlier this earlier year Education and Employers undertook a study of the career aspirations of 13,000 children in the UK aged 7-11. The findings of the Drawing the Future report echo those of the ONS survey of 16-21 year olds. The most popular job for a girl was a teacher, for boys a sport person. We found that the jobs children selected were very similar to those chosen by children in the 1990s.

This is perhaps because most children in the survey said they had chosen a job based on what their parents did or because they had seen it on TV / social media with less than 1% hearing about the job from someone actually doing it visiting their school – something we need to change.