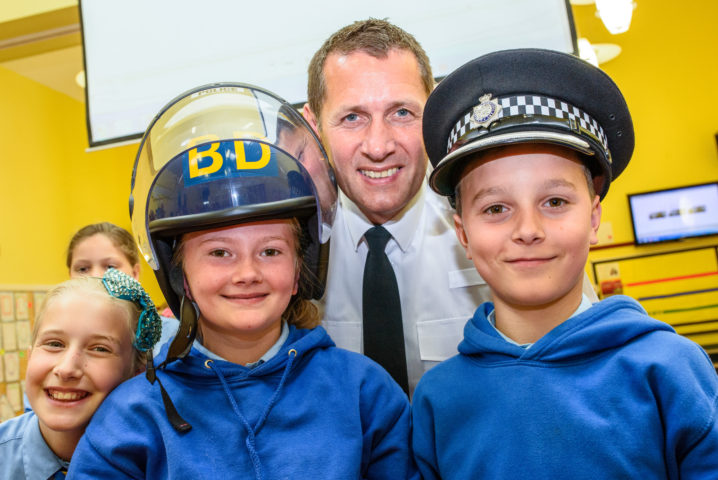 Pictures of the event are available here.

The Blackpool Gazette covered the event, read about it here and here.

Primary Futures Blackpool launched yesterday at St Nicholas Church of England Primary School. The aim was to help primary-age children see the link and purpose between their learning and opportunities in later life. Children who can see the meaning and relevance of what they are studying are much more likely to achieve.

The Primary Futures Blackpool launch started in the school hall with a number of volunteers taking part in ‘What’s My Line’ where children quizzed volunteers over the jobs they do – see how it works here. After the activity some 45 volunteers visited classrooms and met with small groups of children, they chatted informally and answered questions about their jobs. Children asked the volunteers what is involved in their jobs; for example travelling and meeting people, and how they use subjects such as Maths and English in their everyday work.

The aim was to introduce the children to a wide range of people from different backgrounds doing a variety of jobs.

Many children, especially girls from disadvantaged communities lack the role models they so desperately need. They often have deeply ingrained gender stereotypes as well assumptions about what people from certain backgrounds can achieve, which limits their horizons in life. The importance of tackling this is only just beginning to be recognized. For example the two minute film done by the charity Education and Employers, Redraw the Balance, has been viewed over 18 million times and has attracted interest from governments across the world.

The economic, social and education challenges of Blackpool are well known. According to the 2015 Indices of Deprivation in England, more than a quarter of the population in Blackpool experienced income deprivation last year. Blackpool is currently ranked in the bottom three local authorities in England for educational attainment.

Andy Mellor said “Coastal towns such as Blackpool face a unique mix of education challenges including deprivation, poor attainment, low aspirations, high unemployment and a sense of marginalisation. That is why I and a group of other heads are working together to tackle this. What has made the approach different is that it is led by local head teachers working collaboratively across the area, building on what works and then seeking support from employers and government”

Prime Minister, David Cameron said: “Children who understand the link between the world of work and what they learn in school are much more likely to achieve. Primary Futures is a great nationwide initiative developed by the National Association of Head Teachers and charity the Education and Employers. It gets people from different backgrounds doing a wide range of jobs from apprentices to CEOs, archaeologists to zoologists to volunteer an hour of their time to visit local schools across the country and talk to children. It’s a great campaign and one that deserves the widest support”

In February Andy Mellor, Head Teacher of St Nicholas Church of England Primary School, supported by other Head Teachers in the area and the National Association of Head Teachers (NAHT), wrote to business leaders. The ask was a simple one – for employees to volunteer their time in primary schools. As a result 362 people have already signed up ranging from apprentices to CEOs, archaeologists to zoologists via the free on-line matching service Primary Futures. With 28 schools in the area this means 12 volunteers per school.

Russell Hobby, General Secretary of the National Association of Head Teachers sees this as blueprint for other coastal and deprived rural towns across England and is calling on the government to support and adopt this approach. Russell said “Many of our coastal towns are high youth unemployment hotspots. Seaside towns have high levels of part-time working, commuters and retired people, all working against young people engaging easily and readily with their local economic community. We need to take action to ensure that young people growing up in our most disadvantaged coastal towns get the best possible start in life, are aware of the breadth of opportunities available and are encouraged and supported in their ambitions”.

Primary Futures has been designed by the NAHT and the charity Education and Employers and makes it quick, free and easy for schools to find local volunteers via an on-line portal. Over 30,000 volunteer have registered nationally and the scheme has attracted interest from over 35 countries.

“It is a real challenge to raise and broaden aspirations of children in deprived coastal areas like Blackpool. We want to turn the tide by tackling low ambition early on. We have run a number of pilot events in individual primary schools in coastal towns including Scarborough and Folkestone. We now want to focus on working with groups of school in a whole coastal area. We hope that the approach being taken in Blackpool will be used as a  blueprint for other parts of the country” said Nick Chambers, Director of Education and Employers.