A new initiative is being launched in Bradford to raise and broaden the aspirations of young people and provide them with a better understanding of the job opportunities and career routes open to them. It is a collaborative effort involving teachers, local organisations, community groups, volunteers and employers in the area. Together, we’re hoping to inspire the young people of Bradford and create a real buzz in the city.

During 13th – 19th October a series of exemplar events will be taking place in primary and secondary schools across Bradford. In primary, they will follow the Primary Futures programme, including activities such as “what’s my line?”, where children try to guess the volunteer’s career, and talking in small groups about their job, often using props. In secondary, activities will include career speed networking, inspiring talks, CV workshops, mock interviews and careers fairs.

Each day has a different theme: 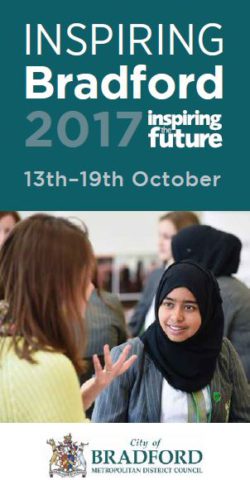 Volunteers from all levels – apprentices to CEOS, and from all sectors – archaeologists to zoologists are giving an hour of their time during the week to go into schools and chat informally to young people about their career.

Education and Employers Charity, Bradford Council, The National Science and Media Museum, The University of Braford and the National Association of Head Teachers are just five of the organisations who have come together and are backing this but it is hoped that many other will join.

The week will not simply be a one off – the intention is to encourage more people to volunteer and more schools to invite volunteers.

It’s not too late to take part and volunteer your time to give back to the community of Bradford. If you’d like to get involved please email victoria.york@educationandemployers.org.