The Inspiring Women campaign in partnership with the Ministry of Defence hosted a flagship ‘career speed networking’ event on 12 January at the MoD headquarters in Whitehall London. There were 25 women representing a wide range of careers in the defence industry talking with 100 state school girls about their jobs and experiences. Minister for the Armed Forces, Penny Mordaunt, MP opened the event and took part in careers speed networking. The even was closed by Air Vice Marshal Elaine West, the highest ranking female in the British Armed Forces. 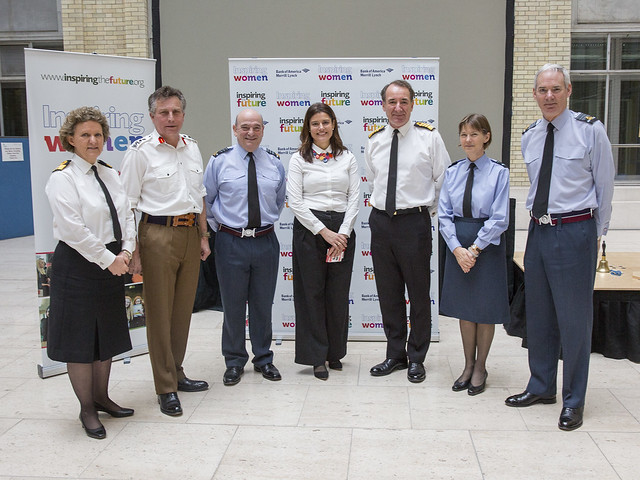 Girls tell us that they have little idea about the career options open to them and the exciting range of jobs available – e.g. medical, logistics, engineering, flying, finance etc. The aim of the event was to introduce young women to careers in defence. It was also a chance to help break down persistent job gender stereotypes. The students had the opportunity to speak to women from a number of positions including law, intelligence, finance and music – highlighting the diversity of roles available to women in the defence sector. A few apprentices attended the event from the Civil Service who highlighted apprenticeship routes available to young women in the defence sector.

Miriam González Durántez, Partner at law firm Dechert and Inspiring Women campaign Champion, who also spoke to the girls, said: “The Defence sector offers a wide range of opportunities to both, men and women. There are plenty of rewarding careers and fulfilling lives whether in the Army, the Civil Service or in the private sector. Women have already proved that any barriers can be broken down if you work hard and you are determined to make it work.”

Lizzie King, Careers Advisor at Burntwood School, Wandsworth whose pupils took part in the event, said: “This was a fantastic opportunity for our students to understand the range of jobs that are available in the defence related sector.  As well as the variety of occupations on offer, the students had the chance to learn about the various pathways into the Ministry of Defence which they currently know very little about. It was particularly refreshing to communicate that these jobs are available to mixed academic abilities.  Many of our students would consider the Ministry of Defence to be very remote from their lives and so this will be an excellent way to demonstrate that all pathways are open to them if they believe in themselves, put their hand up to get involved and take the initiative to find out more.”

Teacher Thomas Holt, Head of year 10 at Riverside School, Barking and Dagenham, whose pupils took part said: “I hope that as a result our students broaden their understanding of the defence structure in the UK and gain greater understanding of the variety of roles within this field. Similarly I hope students feel empowered as women that they are able to take on such jobs and achieve great things.”