Women make a fantastic contribution to the music industry, but far too often this is not sufficiently acknowledged or celebrated.  Like many other industries, the music industry shows a worrying gender imbalance, particularly at senior levels. Creative & Cultural Skills report that the gender divide across all music industry related jobs is 67.8% male to 32.2% female. Performing Rights Society for Music report that their membership of over 95,000 songwriters and composers is only 13% female. Association of Independent Music’s 2012 membership survey revealed that only 15% of label members are majority-owned by women.

More worryingly, girls are telling us that they have little idea about the career options open to them and the exciting range of jobs available – e.g. musicians, conductors, composers, sound engineers, radio presenters, record producers, agents, PR, etc. It is time to change that and inspire the next generation of girls and women to consider a career in music.

Kanya King MBE, CEO and Founder of MOBO said: “I’m so thrilled to be taking part of such a great event for an even greater cause. A number of strong, inspirational women were huge role models to me growing up and were instrumental in shaping my career, so any opportunity I have to do the same for other young women I grab with both hands! I’d love to see many more women have successful careers in all areas of the music industry and not just behind the microphone.”

Sandie Shaw, singer and 1960s pop icon said: “Neo feminism: we have reached a stage where it is not enough for individual women to become empowered, it is now all about empowering each other. It makes me so happy to have reached a time in my life where I have some experience and confidence to pass on and at the same to listen and to learn from young women’s current experiences and ideas. I am looking forward to participating in this wonderful dialogue. Only when women are truly happy and fulfilled can men be too.”

Katie Derham, BBC radio presenter said: “”There are so many different ways to enjoy a career in the music industry and follow a passion for music, and I’m delighted that Inspiring Women is spreading the word.”

Becky Hill, the first The Voice UK contestant to score a UK Number 1 said: “I am honoured to be a part of such a great cause. I’ve found there is a real lack of other women in the industry and I’m so excited to be promoting more young women to get involved in this industry. I’d love to be able to have my music engineered, written, produced, mixed, mastered and A&R’d by women. I don’t know why I haven’t already!’

Classical violinist, Tasmin Little OBE, said: “I am delighted to be taking part in the Inspiring Women in Music campaign. I think it’s imperative that young women have role models – as a young violinist, I was inspired by strong female role models who gave me the confidence to believe that my ambitions were achievable and that my gender would not hinder my career path. It is important to give all young women the clear and positive message that our society values and celebrates women in all career areas.”

Miriam González Durántez, Partner law firm Dechert and Inspiring Women campaign Champion, said: “Pretty much every person in the world is able to sing a song from the UK music industry. It is not only an industry worth £3.5 billion to the UK’s economy but also one of this country’s best ambassadors in the world. The music industry offers a huge range of career options for boys and girls .I am delighted that some of the best female representatives of the industry and fantastic role models have joined us today to inspire the next generation of girls and encourage them to pursuit a future in music.

Lucy Noble, Director of Events at the Royal Albert Hall, said: “We are delighted to be hosting this flagship event. The Hall believes passionately in making the arts accessible to all, and we reach over 100,000 children a year through our Education & Outreach programme, which fosters a love of music in young people while raising awareness of the many careers available both on and beyond the stage. As the director responsible for overseeing all the shows at one of the world’s most iconic concert venues, I look forward to sharing my expertise and experiences with young women from across the country.”

What is the Inspiring Women campaign?

The national Inspiring Women campaign launched on 17 October 2013 and we already have 16,500 volunteers. Our ambition is to see 25,000 women from a wide range of occupations going into state schools, over the next year, talking to 250,000 young women. Since the 2012 launch of our Inspiring the Future programme, 8,563 teachers from nearly 75% of state secondary schools have signed up as a means of finding volunteers to talk with pupils about jobs and careers.

You can join us!

Pledge one hour a year to change young lives by volunteering to talk with girls in school.Register to take part here: www.inspiringthefuture.org

See our photos from the event: 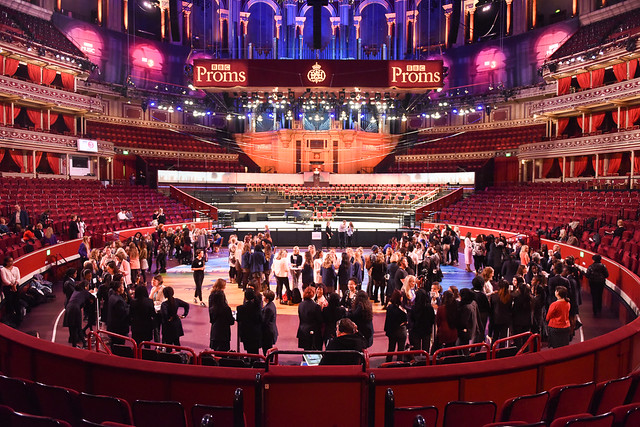