The report finds that contact with employers between the ages of 11 and 18 gives young people a career boost later in life, but those who need it most get it least. Young people who reported the lowest level of employer engagement came, on average, from more disadvantaged backgrounds: those who received free school meals, whose parents had not attended university and whose highest qualifications were GCSEs (or level 2 equivalent) or lower. Moreover, young people reporting highest levels of engagement were more likely to go to independent and grammar schools, and go on to higher level qualifications. The report also found that variation in experience of employer engagement is heavily related to attainment levels and geographic region. The typical young British adult recalls just 1.6 engagements with employers whilst in secondary education.

Using statistical analysis, the authors found that young adults who found their school-mediated employer engagement activities ‘helpful in getting a job’, earned up to 16.4% more than peers who did not take part in any activities. Higher volumes of school-mediated employer engagement are associated with risks of becoming NEET reducing by up to 86%.
When thinking about what more schools could have done to prepare them better for adult working life, young adults would have welcomed greater preparation for employment from their schools and colleges – with greatest demand from young women and adults from disadvantaged backgrounds, and greatest demand for practical information and job-finding skills.
A majority of respondents felt that their schools and colleges had not prepared them well for adult working life, unless they engaged on two or more occasions with employers (see below). The more employer engagement recalled by respondents, the more useful they thought it was to them in making decisions at 16, in getting a job and applying for university. 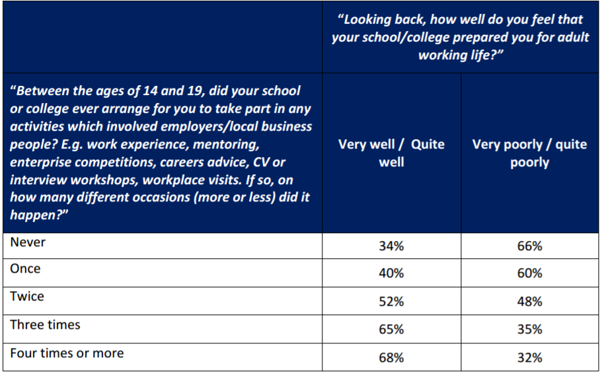