This was a unique event in that it allowed primary age pupils to talk directly with Apprentices about what they do which has never been done before on a large scale in the UK.

It is important at an early age that young people are aware of all routes open to them in later life. Many are familiar with the concept of university and successive governments have attempted to encourage young people think about enterprise and starting their own business, but the link has not previously been made between primary and apprenticeships.

We know that for children of primary age, making a connection between what they learn in the classroom and how it relates to the world of work isn’t easy. Primary Futures Apprenticeships is intended to help change that. This event aims to broaden horizons of primary schools children, help them see the links between their lessons and their futures and reduce gender specific stereotyping.

The Prime Minister’s Apprenticeship Tsar, Nadhim Zahawi MP, said: “It’s so important for primary school children to meet with apprentices and I was delighted to have the opportunity to be involved with this at Mayflower Primary School. Many of us develop our idea of a dream job while we’re at primary school, and apprenticeships are a great way of achieving these dreams. As the Government seeks to hit the target of 3 million apprenticeship starts by 2020, school pupils should be aware of future options they have from a young age, so they’re familiar with the system and what the possibilities are as they shape their future.”

Russell Hobby, general secretary of school leaders’ union NAHT said “It’s clear that there’s a real benefit in talking to children at an early age about the jobs they might do when they’re grown up; about how important their primary school learning really is in terms of future opportunities. Providing the right kind of inspiration can broaden horizons, which is where Primary Futures is proving to be so successful. Children are introduced to people from all sorts of jobs and can see the different paths to success, whether that’s degree, apprenticeship or any other route. Detailed guidance may come later but careers inspiration shouldn’t wait until children get to secondary school.  Involving apprentices in Primary Futures is a great extra angle to explore. Apprentices may well be closer in age to the children they’re speaking to, and as a result they may be more approachable and easier to identify with. Equally, it’s important to demonstrate that apprenticeships are a credible route for future employment.”

The charity is also running an Inspiring the Apprenticeship campaign in secondary schools supported by the SFA which enabled 244,000 young people from more than 1,000 state secondary schools and colleges to meet volunteers with first-hand experience of being an Apprentice. To continue and support the promotion of more apprenticeships in school and colleges they have just launched a more advanced apprenticeship volunteer matching service to the existing platform, allowing volunteers with knowledge about apprenticeships, to choose in what capacity e.g. apprentice, recruiter, and allow teacher to search down and select the appropriate apprentice specialist they are looking for.

Primary Futures uses on-line matching technology to get people from a wide range of professions and different backgrounds – from apprentices to CEOs, archaeologists to zoologists – to give an hour to visit their local school where they talk about their job to enthuse the children about the opportunities open to them and how important literacy and numeracy are. Teachers, employers and individual apprentices register and are matched via www.primaryfutures.org 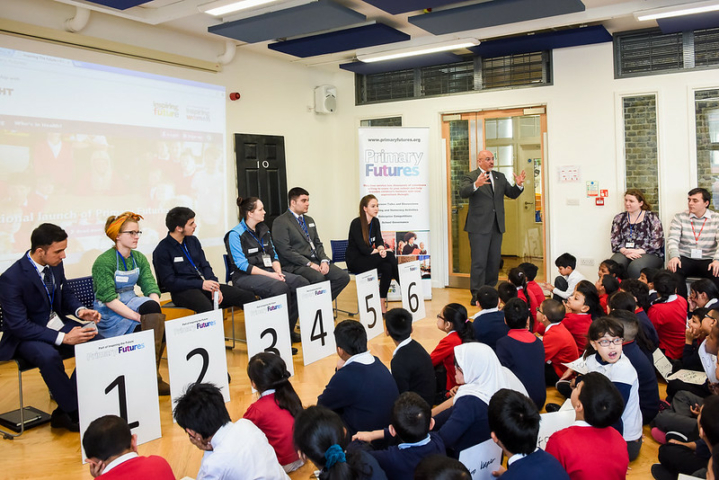