During work hours, as outside, you need a number of core skills to be productive and happy. Many are commonly talked about in the UK – communication, effective teamwork and good writing skills. The role of maths is often not well discussed. GCSE Maths is a brand – you are more likely to be hired if you have it. Yet the value of its application across a variety of jobs is sometimes less clear to both employers5 and employees. 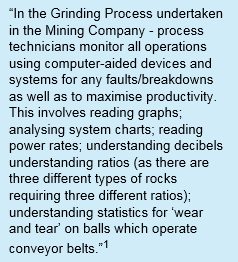 In workplaces, maths is often difficult to spot. It appears differently from the way people
studied it at school. There is a disconnect between school and workplace maths. Maths in the workplace is never used in isolation, but it is taught in that way at school. Workplace maths is embedded in specific roles, tasks and goals – it can appear trivial and non-mathematical2. In the classroom, maths is clearly labelled and often taught as a series of different topics. In the workplace, different mathematical topics are applied in parallel.

In the Sutton Trust’s recent (and comprehensive) review of the use of maths in workplaces, The Employment Equation2, 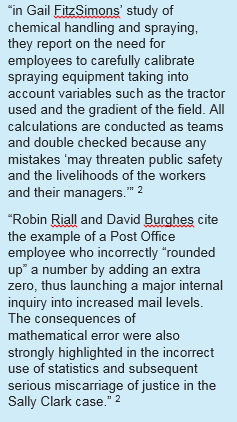 Prof. Jeremy Hodgen and Dr. Rachael Marks described workplace maths as being in what sociologist of technology Bruno Latour called ‘the back box’. In working practice workers often simply enter a number and get another out. How that is calculated is in/behind the black box. A good example being complicated spreadsheets made by someone else – ‘the magic spreadsheet’ does the work for us but we don’t know how to fix it if it ‘breaks’ or how to modify it to improve its performance.

Due to low numeracy, the mathematical content embedded in working practices is sometimes only understood by a small number of experts.  Although the use of technology that can perform calculations in contemporary workplaces can drive innovation, workers often only know how to enter information and get a number out of the system. This leads to a trickle cost of lost productivity to employers – an estimated 3.2 billion pounds per year4. Productivity is lost when workers cannot sense check their results, spot rogue figures or struggle to deal well with unexpected situations when they need to engage with ‘black box’ processes. 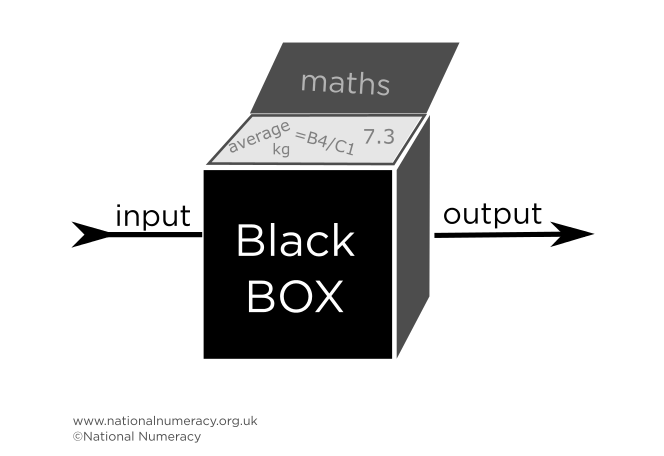 Technology has increased the numeracy needed by workers. Both Hodgen and Marks, and a recent innovative report by the Australian Chief Scientist’s office1, proposed that students need to be taught maths in technology rich environments. Hodgen and Marks highlight situations in which workers, in a number of sectors, need to be able to interpret numeric information produced by the tools they use. They also show the value of those workers understanding the mathematical processes behind them in more depth. Whereas historically workers could learn over a lifetime to use just one tool, the range of tools they need to use nowadays provides more challenges.

These key reports point out that the ‘skills deficit’ in numeracy is not about calculation. It’s about the ability to interpret and apply mathematical knowledge. In the rush to pass exams, students are not always taught to use maths skills in a connected way. This hinders their ability to apply the maths they may know.

There is a core to the basic skills of maths which National Numeracy calls “being numerate”. This is the core of the Essentials of Numeracy. Being numerate describes the behaviour and attitudes people need to develop in order to apply maths in day to day situations.  It involves reasoning, problem-solving and decision making abilities. 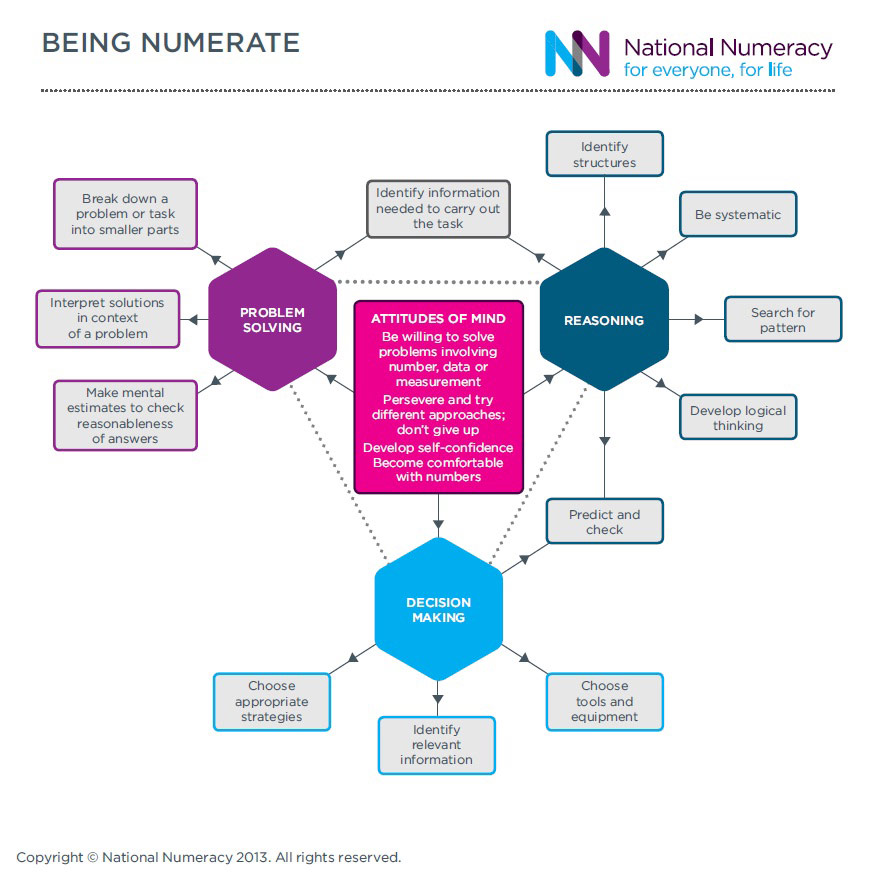 Descriptions which in their essence are similar to our definition of ‘being  numerate’ appear in Hodgen and Marks’ report, the Australian Chief Scientist’s report and the OECD’s recent “Critical maths for innovative societies”1 report (co-authored by Mevarech and Bracha). They arrive at these conclusions through varied methods. Hodgen and Marks reviewed a series of research papers which highlighted how maths is used in daily life. The Australian Chief Scientist’s office sent a team of teacher-researchers into work settings to audit the skills used by workers. Researchers Mevarech and Bracha reviewed well established literature on what works in raising students’ attainment in maths using meta-cognitive approaches.

The conclusions are similar, part of the same patchwork. The Australian Quantitative Skills report calls for a focus on “executive function skills” and “mathematical modelling”. Hodgen and Marks urge us to focus on the ability to apply simple maths in complex settings.  Mevarech and Bracha suggest the power of “metacognition” – regulating thinking through planning, monitoring control and reflection.

More and more reports are calling for more attention to the behaviours and attitudes that make people numerate and able to apply maths in everyday life. In describing the needs of innovative societies, the OECD called the tasks workers need to engage with ‘CUN tasks’ – complex, unfamiliar and non-routine. Australian researchers concluded that there should be an emphasis on building students’ confidence and their ability to use mathematics in a range of familiar and unfamiliar contexts. Yet our school system still mostly teaches students to work with ready-made algorithms.

Due to low numeracy, mathematical processes embedded in working practices are sometimes only understood by a small number of experts.  This cannot but stunt workplace productivity.  We should listen to the growing research literature that tells us to pay more attention to the need to focus on numerate behaviours and attitudes, not just traditional calculation-based skills.

Head of Data, Research and Evaluation at National Numeracy www.nationalnumeracy.org.uk

4 “Cost of Outcomes Associated with Low Levels of  Adult Numeracy in the UK.” 2014. Pro Bono Economics.