Arguably, UK school-to-work transitions have become more fractured as a result of declining availability of vocational routes and standardisation of the education system focused upon academic attainment. Simultaneously, research has demonstrated that youths’ employment ambitions have increased resulting in a mismatch between occupational hopes and realistic outcomes in adulthood.

The authors here utilise data from the British Cohort Study (BCS70) to analyse the impact of adolescent ambitions upon work instability, wages and educational attainment in later life. Evidence is drawn from responses concerning opinions on career goals at age 16 and outcomes at age 34; creating a sample of 2,732 males and 3,690 females. Controls were put in place for youths’ socioeconomic origins, academic orientation, marital status, number of children and employment experience.

The results are situated within the theoretical ‘mismatch’ framework provided by Schneider and Stevenson (1999), which categorises young people within five groups. The first is referred to as ‘high and aligned’, meaning as teenagers their occupational aspirations and educational expectations are both high. ‘Misaligned’ categories relate to both ‘overestimation’ of education required for occupation and ‘underestimation’ of educational attainment. The fourth group donates those who are ‘low and aligned’, meaning occupational aspirations are lower (i.e. non-professional roles) and so youths expect to leave education earlier and with fewer qualifications. The final category relates to those who are ‘uncertain’ about their occupation trajectory. 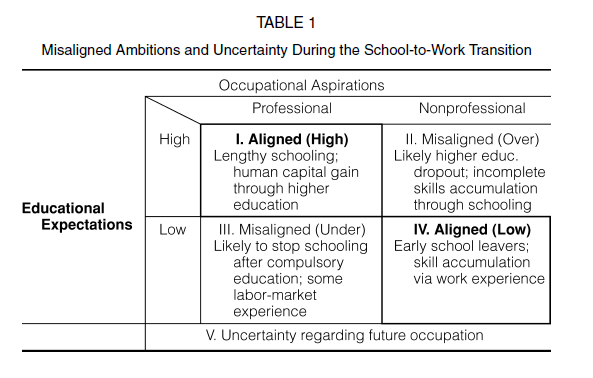 Results illustrate adolescent ambitions are shaped by socioeconomic factors in childhood. 62% of youths with ‘high and aligned’ ambitions belonged to the highest denomination of social class. Those who underestimate necessary educational requirements mostly represent the least advantaged youth. These 16 year olds underestimating educational qualifications are more likely to be unemployed between the ages of 16 and 34 in comparison to those who are ‘high and aligned’. ‘Uncertain’ individuals also experience greater periods of unemployment. In comparison, those who define as ‘high and aligned’ have higher education qualifications in adulthood.

Youths with ‘high and aligned’ ambitions benefit from greater economic success and higher wages in later life. Statistical analysis proved that 8% of wage variation for men aged 34 (but not for women) can be explained by ambition alignment aged 16. This finding suggests that men who do not have ‘high and aligned’ ambitions during their youth are likely to face a wage penalty in their adult experiences of the labour market. The variations between wages of those who classified as ‘misaligned’ and ‘uncertain’ youths ranges from 11-17%.

These results demonstrate the negative consequences of ambition misalignment amongst youths, particularly those who are uncertain or underestimate their educational qualifications required. These categories are more likely to experience lower educational attainment, lower wages and increased periods of unemployment. Uncertainty and a lack of focus during schooling can therefore have an adverse impact upon later educational and occupational achievement.

The authors suggest future research should contemplate the efficacy of careers guidance in aiding young people to align their occupational ambitions with educational expectations. They recognise the role of information dissemination in providing adolescents with appropriate advice to traverse the school-to-work transition effectively.