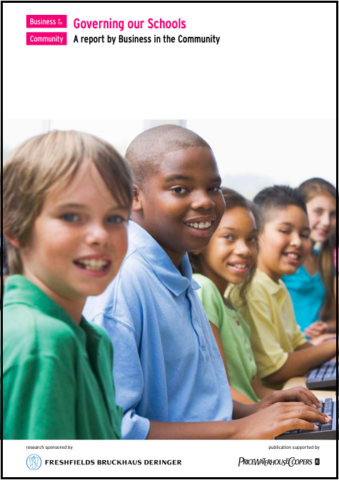 In 2008 Business in the Community undertook a detailed report into school and academy governance called ‘Governing Our Schools’.

The landmark report was written by their Director of Education Nick Chambers (now CEO of Education and Employers) and his team for the National Council for Educational Excellence, which at the time was looking at how to make employer engagement in education easier and better for everyone involved. Now, ten years on, the research team at Education and Employers have revisited some of the themes that emerged from that earlier report a decade ago.

Here are our main findings:

b) Although clearer, the roles and responsibilities of governors and trustees have not been simplified in the last ten years. The emergence of new models of school and academy governance and the varying degrees of local governing board autonomy in Multi-Academy Trusts (MATs) have made some roles more complex.

a) Since 2008, there has been an ongoing push to value governors with professional skills. Participants in the study welcomed the increased focus on skills but felt that the DfE’s competency framework is too prescriptive and does not guarantee governors will be effective in their roles.

b) Interviewees were predominantly in favour of achieving the right balance between skills and community representation, referred to as the ‘stakeholder plus’ model of governance.

c) Diversity on governing boards, particularly in terms of black, Asian and minority ethnic representation, has not seen much change in the last ten years.

d) Interviewees identified a third set of skills important to governance that they suggested were additional to professional skills and stakeholder representation. These they deemed as skills of ‘leadership’ and ‘governance’ itself.

a) School governance itself is now much better publicised and there are more pathways for volunteers to become a governor. Initiatives like Inspiring Governance, Academy Ambassadors and Governors for Schools were praised by interviewees for helping to support boards in their governor and trustee recruitment.

b) It is still more difficult for schools in rural and disadvantaged communities to recruit governors than the more urban and well-connected areas of the country.

a) Interviewees felt that increasingly, new and existing governors are put off from volunteering due to the increasing pressures of the role and perceived negative press that governance receives when linked to school/MAT failure.

a) While training and guidance has improved, it is still hard to recruit professional clerks to school boards. Many schools still use a member of the school’s administrative staff as the board’s clerk.

a) Training and induction for school governors has improved. However, the uptake of governor training is varied according to the availability of training, school geography, school budget and whether the chair encourages it.

b) The majority of interviewees favoured making induction training mandatory.

c) Interviewees called for more ongoing training and CPD taking place once governors are in post.

a) There was unanimous agreement that volunteering as a school governor was beneficial for both volunteers and their employers.

b) Larger employers encourage school governing more formally (through volunteering policies and paid time off) than small and medium sized enterprises, who are more informally supportive.

c) The growth of self-employment has not significantly impacted governor recruitment.

a) Interviewees felt that changes to school funding in the last ten years have negatively impacted school governance. There was wide agreement that it is now harder for governors to balance the school budget without cutting Special Educational Needs and Disability (SEND) provision, closing sixth forms, spending less on teacher CPD or making posts redundant.

a) More emphasis has been placed on the accountability of school governors since 2008.

b) Ofsted has placed more emphasis and inspection on governing boards in the last ten years, but interviewees felt inspectors do not seem to adequately understand the role/contribution of governors.

c) Ofsted are limited in their ability to inspect academies without being able to adequately assess the governance structures of multi-academy trusts.

a) Perhaps not unexpectedly, governing boards are embracing new forms of technology to support meetings and to keep connected between meetings (such as conference calls and Skype).

b) Governing boards are also using new technology to support the business of their board such as e-mailing papers, document sharing platforms, online recruitment services and online e-learning=