The report was launched at an event in central London on the 6th June 2019. Watch Dr Elnaz Kashefpakdel (Head of Research, Education and Employers) discuss the findings, as well as keynote speeches from Geoff Barton (ASCL) and Adrian Lyons (Ofsted). 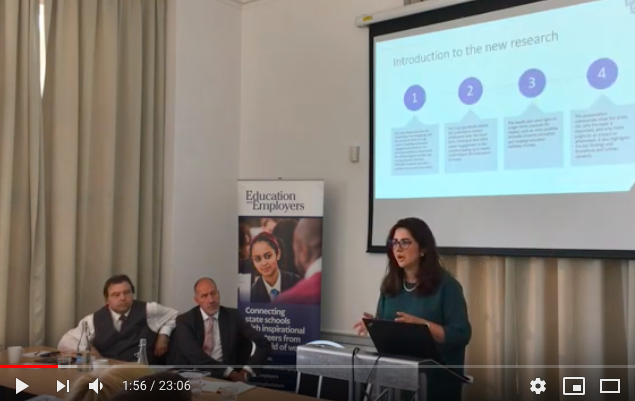 The Australian Council for Education Research have produced an infograph based on the research, you can access it here. 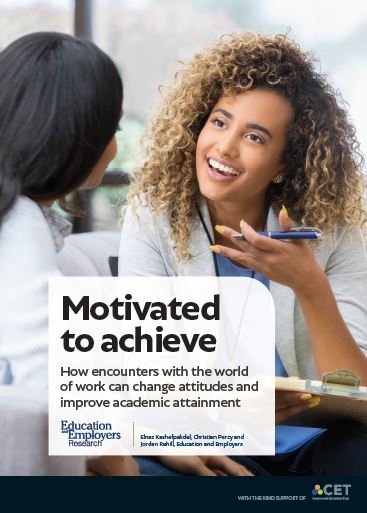 For the first time in England, using a robust methodological approach (Randomised Control Trial) links have been demonstrated between young people’s engagement with the world of work through career talks and their GCSE attainment.

This new research, entitled ‘Motivated to achieve’ shows that participation in career talks with volunteers from the world of work can change the attitudes of Key Stage 4 (14-16 years old) pupils to their education.  This can influence their future plans and subject choices, motivate them to study harder and supports an improvement in academic attainment – even when taking place only a few months before their exams start.  It showed, for the first time, that lower achievers and less engaged learners responded best to the intervention.  This is particularly pertinent for schools facing funding challenges and considering where best to allocate their finite time and resources.

The findings of the report have been covered in articles by BBC News ‘Careers lessons push up GCSEs’, Forbes ‘Experience Of Work Boosts Student Motivation And Grades’ and by Tes ‘Careers talks ‘boost GCSE results’.

This research revealed that changes in young people’s attitude and motivation contributed  towards improvements in attainment.

A) Changes in Student attitudes

B) Changes in the number of weekly revision hours

D) Who benefits the most?

A Randomised Control Trial (RCT) approach was employed, in which schools divided young people across tutor groups into an intervention group and a control group.

The study draws upon data from approximately 650 students in their GCSE year across five schools across England.  The intervention group consisted of 307 pupils who received three extra career talks by employee volunteers on top of the usual career activities organised by their school. In the trial, learners were randomly allocated to the two groups, details of their anticipated GCSE results were collected and then comparisons were made between their predicted grades and how well pupils did in their actual exams.

Data was collected from Year 11 students throughout the academic year 2017-18, with a baseline survey at the beginning of Year 11 and another at the end of the year. GCSE results were collected in September 2018 for everyone who participated in the study. Students who participated in the three career talks also filled in a survey afterward to give their feedback on the talks and comment on what, if any, help the talks had been for their choices and attitudes.

Career talks were from volunteers from the world of work who had been previously briefed to highlight connections between educational achievement and employment opportunities.

The Rt Hon Damian Hinds MP, Secretary State for Education said: “A chance to experience the world of work first hand can play a huge part in helping young people develop the skills and personal qualities they need for workplaces, as well as showing them how the subjects they are learning at school are relevant in later life.

Geoff Barton, General Secretary of ASCL (Association of School and College Leaders) who will be speaking at the June 6th launch said “Careers talks are a great way of showing young people how their learning in the classroom links to the world of work, so we’re not surprised to hear that this excellent programme has a positive impact on GCSE results. It’s fantastic that so many volunteers are willing to give up their time to come into schools to talk to pupils about their career journeys.”

Dr Elnaz Kashefphkdel, Head of Research at Education and Employers charity said, “This latest report, builds on ten years of our research. Our previous findings have demonstrated the positive impact of connecting young people to the world of work, especially for those from disadvantaged backgrounds.  This report shows that short interactions with volunteers from the world of work can have a powerful impact on attainment.  And more significantly, that the low achievers and less engaged learners have the most to gain in improving their academic attainment.

Adrian Lyons, Her Majesty’s Inspector, National Lead for Economics, Business and Enterprise said “Careers is given a high profile in the new Ofsted inspection framework taking effect from September 2019.  Inspectors will judge whether the school is providing an effective careers programme in line with the government’s statutory guidance on careers advice that offers pupils: unbiased careers advice, experience of work, and contact with employers to encourage pupils to aspire, make good choices and understand what they need to do to reach and succeed in the careers to which they aspire.

A demonstrable impact on pupils’ academic success resulting from employer engagement has been sought since at least Lord Young’s review of enterprise education in 2014.  The work of Education and Employers in providing research-based evidence to establish this link is therefore very welcome”’

Nick Chambers, CEO of the charity highlighted how simple and free it is to facilitate these interactions.  “There are nearly 50,000 volunteers from all sectors – architects to zoologists and all levels –  apprentices to CEOs available to talk to young people about their job and career route. Schools can access these directly via the free on-line match making service Inspiring the Future.”

This report was completed with the kind support of: