The Working Futures series by the Warwick Institute for Employment Research is a study of past and possible future employment prospects in the UK labour market over 10-year periods.

Working Futures primarily investigates demand for skills by occupation and qualification. This most recent report, covering 2017 to 2027, is an attempt to give a detailed picture of the UK labour market with a focus on the employment prospects in 75 industries, across 369 occupations, 6 broad qualification levels, and all levels of gender and employment status.

According to this report, the total number of jobs is projected to rise by nearly one million in the next decade. One primary source of increased employment levels will likely be the private (marketed) elements of the service sector such as ‘Business and other services’. The number of ‘replacement demands’, where workers leave for retirement or other reasons, will be around 11 million.

The trend in favour of greater demand for more highly skilled jobs looks set to continue, though with some growth for lesser skilled occupations as well. In line with this, the proportion of people with higher-level qualifications is projected to grow steadily to 2027. The number of occupations which require a formal qualification is forecast to grow, though more slowly than over the previous decade. The proportion of the labour force with no qualifications is projected to be a small minority by 2027.

The supply of highly qualified people is like to grow more quickly than demand for such qualifications. This is in line with current projects of employment patterns by qualification level. As a result of the increased supply of qualifications, qualification intensity will rise, especially occupations which have not previously employed a large number of those with higher-level qualifications.

The increase in employment over 2017-2027 is projected to be driven in large part by the stronger growth in jobs in business & other services and public administration, education & health, growing on average at 0.6% and 0.5% p.a. respectively. 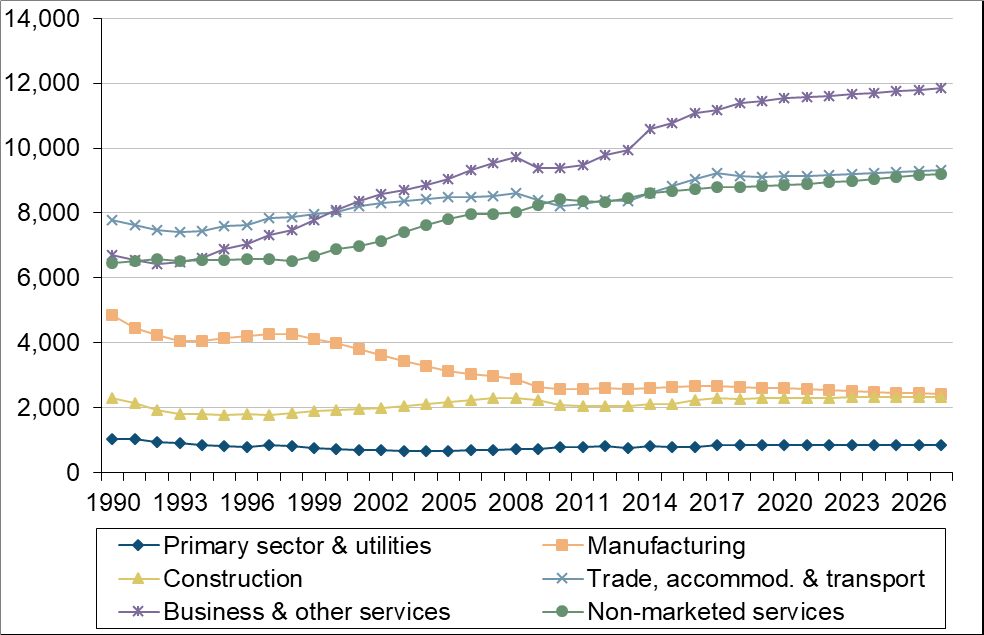 Also see our Disconnected report on aspirations and available jobs in the UK.