By Anthony Mann, Director of Policy and Research, Education and Employers Taskforce, and Steven Jones, Senior Lecturer, University of Manchester, in Engineering UK 2016.

It is now more than fifty years since the British state first acted to enable schools to bring workplace experience into the schooling of young people. The 1963 Newsom Report paved the way for the first formalised work experience placements aimed at young people intent on going into work during their mid-teens. In the half century that followed, experience of workplace has moved from a marginal activity, affecting fewer than 5% of pupils in the 1960s, to a universal expectation. Through the rolling waves of government, charitable and business initiatives, a tidal change has been witnessed in both the UK and in countries around the world.

The policy push for closer ties between schools and employers has been primarily driven by an expectation that employer engagement will enhance young people’s labour market prospects. This was an explicit rationale behind the reforms of both the Labour Party in the 2000s and of the Conservatives in the 2010s. Historically, with little evidence available on impact, policy makers were required to trust their instincts. In recent years, however, a growing body of US and UK research literature has tested whether school-mediated exposure to the workplace can be linked to improved outcomes in the early labour market. While some studies raise reasonable questions about methodological approaches, a compelling story emerges of improved employment outcomes: notably, in terms of wage premiums (found up to age 24) accruing to young adults who, as teenagers, engaged in higher volume levels of employer engagement through their schools than comparable peers.

Within research and policy debates, increasingly it has been asked not whether employer engagement makes a difference to the prospects of young people, but why it does so and how it can be optimally delivered. Stanley and Mann (2014), for example, draw on insights from three inter-related concepts commonly used in academic and public policy literature to explain relative advantage and disadvantage experienced by individuals within the labour market: human, social and cultural capital.1024 Drawing particularly on work by sociologists Pierre Bourdieu and Mark Granovetter, Stanley and Mann offered ‘a theoretical framework that can comprehend accounts of how employer engagement is experienced and how it provides resources that aid progression in the labour market.’ In new research, this framework is tested for the first time.

Steven Jones (University of Manchester) and colleagues have analysed 488 responses to an open question in a 2011 YouGov survey exploring young adults’ experiences of schoolmediated employer engagement: for example, work experience, careers talks, enterprise education, business mentoring. They look at answers to a broad question which invited respondents to reflect on ‘what [they] got out of employers being involved in [their] education.’ Participants were prompted to consider whether the involvement was responsible for ‘changing the way [they] thought about school or college, providing useful information or encouragement for thinking about possible jobs or careers, helping to get actual jobs either through people [they] got to know or giving [them] something useful for job applications or interviews, or in getting into a course at college or university.’ A reassurance was added that ‘maybe [they] got nothing out of it at all.’ In the analysis, responses from 190 young people providing sufficient information relating to personal benefit of some type were considered. Not all young people reported positive benefits, it should be noted. As one individual reported:

“I worked in a bookshop doing the jobs no-one else wanted. This did not affect my decision to become a diagnostic radiographer.”

Using textual analysis of the statements, the researchers explored whether any evidence was apparent of different types of capital (human, social or cultural) being accumulated through experiences.

Perhaps, the most striking finding from the study emerged from its attempt to find evidence of human capital accumulation. It is a theory at the heart of most educational policy – that the more young people know and can do, the better their employment outcomes will be. In the field of employer engagement, considerable attention is devoted to the idea of ‘employability skills’, or the abilities that allow an individual to act effectively in a workplace. It has long been posited that exposure to authentic workplace situations in some ways serves to improve communication, problem solving, team working skills etc. While teachers often testify this is what they routinely observed in episodes of work-related learning, questions have been raised as to whether the typical British experience of school-mediated employer engagement (episodic, short duration, nonassessed, not integrated into the curriculum) could generate significant variation in such skills years into labour market participation.

And in the analysis of reflective statements, this scepticism was upheld. Little evidence of human capital accumulation was found. Significantly less apparent than evidence of cultural and social capital accumulation, improvements in human capital were most commonly witnessed in an indirect fashion – reflections on how workplace exposure led to increased academic application or experiences enabled easier progression into further study – especially at university level. It was in the realm of social and cultural capital that young adults reported the greatest benefits to them emerging from their workplace experiences.

Young people, particularly from independent school backgrounds, provided evidence of social capital in a number of forms. It was expressed as access to information and guidance which was unusually useful and trustworthy because it was deemed authentic:

“Told us from experience. Told us straight.”

“I trusted the word of someone in the working world as opposed to a careers’ advisor or teacher ‘telling’ you what to do.”

Others reported that economic opportunities emerged from connections made initially through school-mediated engagements:

“Following my work experience placement I obtained permanent part-time work at the same business. This steady job helped as a stepping stone into the working world.”

Most striking, however, was evidence that employer engagement activities had in some ways contributed to accumulations of cultural capital. Particular use is made of Bourdieu’s idea of ‘habitus’: that the behaviour and decisions of an individual are shaped and constrained through often inherited and/or unconsciously acquired attitudes and selfperceptions that are linked, to some degree, to wider social structures such as social class, ethnicity and gender. Policy makers often attempt to influence such ways of thinking – for example, in challenging gender stereotyping or making university attendance ‘thinkable’. Mentoring programmes and careers-focused campaigns in a similar vein are commonly designed to encourage young people to think differently about themselves and who they might become.

The new research finds considerable evidence of changes in thinking that can be related to an ultimate economic importance: of young people gaining confidence around their decisions, broadening or eliminating potential options and changing the ways in which education itself was seen:

“It stopped me from leaving school early and made me stay on to go to uni which I think was a good thing in the end.”

“I found my work experience horrible, which is why I made an effort to get a better education and a better job.”

Ultimately, however, complexity is found in the relationships between different types of capital accumulation, as illustrated by this statement:

“Work experience helped me to better understand how my school studies translate into the job world and which areas of my studies would be useful in work. This provided motivation to work hard at university modules that were not necessarily the most appealing in terms of enjoyment but I could see that they would be valuable to finding employment later on.”

For example, through employer engagement activities, a teenager may make the contacts needed to be offered a job (social capital … as access to employment) while simultaneously acquiring the expertise or ability to make them employable in that role (human capital … as skills development). Or, to give another example, a young adult may report maturing and becoming more assured about themselves (cultural capital … as enhanced personal confidence) as a result of trusted information from employers (social capital … as authentic guidance). The research joins a growing body of literature that demands policy makers and practitioners think afresh of employer engagement initiatives, how they relate to a young person’s wider life and what truly drives the significant benefits many appear to experience. 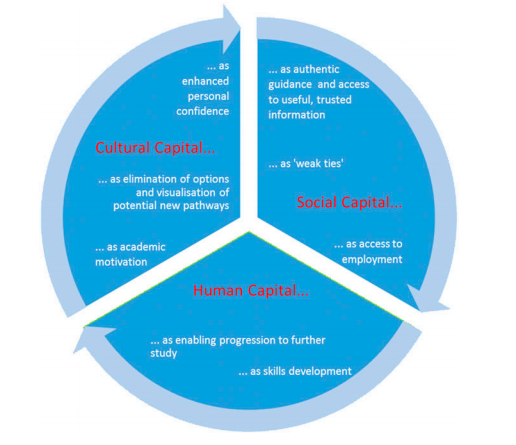