What did you want to be when you grew up? What were your aspirations when you were at school? A ballerina? A fire fighter? An astronaut? For most of us, our aspirations are deeply connected with how we see ourselves now and in the future. They are personal expressions of our interests and reflect our identities. But they also seem to fall into patterns in a range of ways. For instance, some fields, like physics, are male-dominated. Why is this? What are the paths that lead some students to pursue careers in science, and what drives other students away?

This question is not only of interest to us as researchers in science education but is consistent with ongoing concerns among employers, policymakers and educationalists. In the UK and internationally, there are fears that not enough young people are going into the economically important areas of science, technology, engineering and mathematics (STEM). In response to these concerns, the ASPIRES study based at King’s College London sought to better understand how young people form their science and career aspirations between the ages of 10 and 14. Our recent book, Understanding Young People’s Science Aspirations, draws together and reflects on findings from research we conducted with thousands of young people. It offers new insights into how young people develop aspirations for further study and, ultimately, careers in science. The research tackles the issue of not only increasing but also diversifying participation in post-compulsory science, by focusing on how and why so many students come to see science as ‘not for me’.

Policymakers and many employers have tended to assume that low recruitment into science is due to science being regarded as unimportant and uninteresting by students and their families. Proposed solutions have focused on making science lessons exciting and interesting, with the expectation that this will ‘raise aspirations’. Our research, which surveyed and interviewed children at the end of primary school (age 10/11) and then twice (at age 12/13 and 13/14) in early secondary school, suggests otherwise: young people and their families consider science to be both important and interesting. For instance, close to 70% of students in our surveys agreed that they learned interesting things in science lessons and felt that studying science would be useful for getting a job in the future. But this valuing and interest is not enough to drive choices. 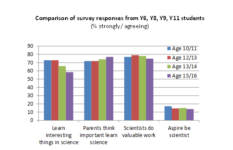 We found that aspirations for a science-related career are ultimately influenced by a range of interrelated factors, including gender, ethnicity and social class. The role of the family is also key, not least for giving children a feel for whether science is ‘thinkable’, desirable and achievable, or not. For example, some young people in our study described a home life rich in ‘science capital’ (science-related resources and dispositions), with families regularly talking about science, discussing science-related news stories over dinner, watching science TV programmes and going to science-related events and places (like museums). In comparison, other young people described how their families ‘never really talk about science’ and struggled to identify where is might crop up in their daily lives.

But it is not just family that matters – school science and the image of science and scientists in the wider society also have a role to play. In particular, we found that the image of science as ‘only for the clever’ was pervasive and played a role in making many students assume that post-16 science is ‘not for me’. Indeed, close to 80% of students completing our surveys agreed that scientists are ‘brainy’. This resonates with the image of science as a ‘difficult subject’, which is further reinforced by the high standards required in order to progress to post-compulsory science. In this respect, enjoying science is simply not enough to enable continuing with the subject.

We believe that school science has an important role to play. Although students generally enjoy science in school and find it interesting, we would argue that science lessons need to do more to support and encourage students to see science as ‘for them’. This means not just more practical work – or making science more ‘interesting’ – but rather, it is imperative that science classrooms become places where more students’ are enabled to identify with science and can feel that their opinions, identities and experiences are welcomed and valued. Indeed, we are exploring how such approaches might be put into practice in our sister project, Enterprising Science.

There is clearly no single silver bullet for solving the STEM participation issue. Our book identifies a range of complex factors influencing aspirations and choices – but in it we also suggest some ways forward for policy and practice. For instance, we argue that it is key to challenge the ‘brainy’ image of those who work in science, in order to promote an appreciation of science as something that is ‘for me’ rather than only ‘for the clever’. Employers could have a particular role in this, by highlighting the range of careers that science-qualified individuals can progress into, both in and beyond STEM fields. Care might also be taken regarding whether role models reinforce the stereotype that only the exceptionally clever work in science? Finally, as we also discuss, organisations might usefully assess their intervention work through the lens of science capital, to help ensure that efforts are aimed at challenging stereotypes and ‘building’ science capital. We hope that the book can provide organisations and individuals with a shared way of understanding the issues and a desire to collaborate together to develop solutions.