In an article for the TES, Nick Chambers CEO of Education and Employers argues that if we are serious about improving social mobility in this country then we need to start addressing the issue when children are still at primary school. 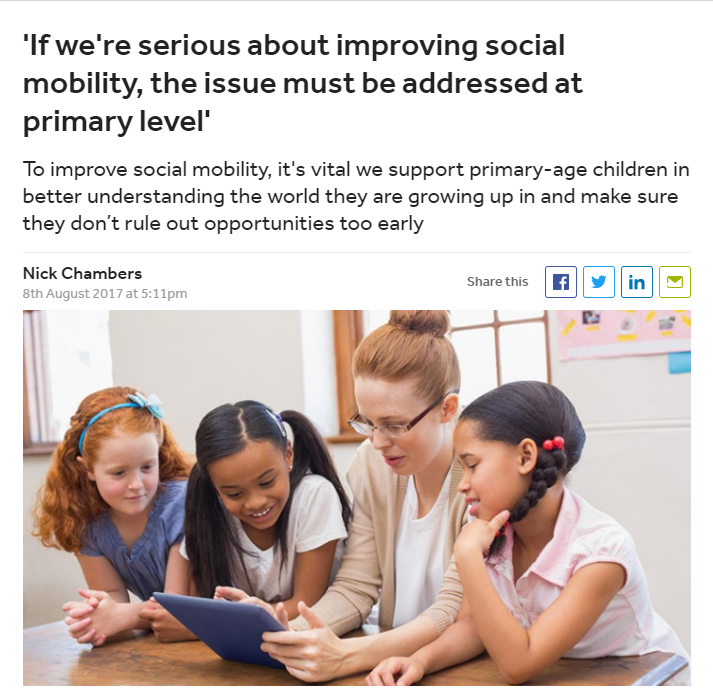 To improve social mobility, it’s vital we support primary-age children in better understanding the world they are growing up in and make sure they don’t rule out opportunities too early.

I have for a long time been puzzled by the fact that reports and speeches on social mobility seldom mention primary schools.

As things began to get a little quieter at the start of the school holidays, I decided to see if my perception was accurate. I started by rereading the Coalition government’s Opening doors, breaking barriers: a strategy for social mobility (2011) and then more recent reports including those by the House of Lords Select Committee (2016) and the Social Mobility Commission (2017).

I failed to find any reference to the vital role that primary schools play in raising aspiration, broadening horizons and connecting children’s learning to their future lives, or to the need to tackle stereotyping that children often have about jobs.

I believe that if we are serious about improving social mobility in this country then we need to start addressing the issue when children are still at primary school.

Anne Lyons, president of the NAHT heads’ union, feels similarly, saying that: “All primary school pupils, regardless of where they live in the country, should get the same chance to meet a wide range of people from the world of work who do a wide range of jobs. If we want to raise and broaden aspirations and improve social mobility, this is vital.”

Heads and teachers frequently say that many children from disadvantaged backgrounds have high aspirations but these are often narrow and unrealistic. The jobs they aspire to may be ones that their parents do, their parents’ friends do or that they see on the TV and social media.

Research has shown that children as young as 6 or 7 start to define jobs by gender and rule out certain subjects and career routes.

Professor Louise Archer, of UCL Institute of Education’s Aspires project, has said: “The perception that science is interesting but ‘not a job for me’ is entrenched by the end of primary school, underlining the importance of starting early with interventions aimed at broadening students’ views of where science can lead and what a ‘science job’ entails.”

Research undertaken by the charity Education and Employers has shown that volunteers from the world of work can help children to see the relevance of the things they are learning and how they open up possibilities later in life.

If children see the opportunities their learning can give them then they are more likely to have higher and broader aspirations. Volunteers can also play a key role in providing children with role models and tackling stereotyping around gender and ethnicity.

Dr Elnaz Kashefpakdel, head of research at Education and Employers, said: “Our research has shown that 78.9 per cent of primary school teachers surveyed thought that volunteers from the world of work coming into schools can help challenge the stereotypes that children have around the jobs that people do and the subjects they study by gender.”

Three years ago, in partnership with the NAHT, we began a pilot in a primary school in Barnsley, situated in the middle of one of Europe’s largest council estates and a former mining community. The pilot encouraged volunteers to read with children but it quickly became apparent that the biggest impact they were having was in helping them to realise why the subjects they were studying were relevant to their futures, and, in so doing, improving their motivation and attitudes to learning.

Now developed into a national programme, in Primary Futures’ more than 3,000 primary schools have registered and can connect via the free Inspiring the Future online service to over 37,000 volunteers, people from all levels – apprentices to CEOs – and from all sectors – archaeology to zoology.

It is hoped that the Department for Education’s long-awaited careers strategy will finally recognise the importance of primary – not in providing careers advice which is inappropriate at that age but in helping children to better understand the world they are growing up in and making sure they don’t rule out opportunities too early.

We have just published the findings of a survey of 478 primary school teachers undertaken for us by YouGov. More than 90 per cent thought that engaging children with employers/employees and the world of work had an impact on their children’s academic achievement. The figure rose to 97.4 per cent in the West Midlands and 95.1 per cent in Yorkshire and Humber.

This is the first time a link has been made between engagement with the world of work and attainment, and we will be doing further research on this.

Andreas Schleicher, the Organisation for Economic Cooperation and Development’s director for education and skills, commenting on the survey, stated: “The OECD’s international work consistently shows that young children are full of enthusiasm for learning, but as they get older, too often they struggle to see the point of what they are learning and how it relates to their future and, as a result, their educational attainment drops.

“This is particularly a concern for children from disadvantaged backgrounds who lack successful role models from the world of work. Giving primary school-aged children the chance to meet people from the world of work can help them to understand the relevance of subjects they are studying – and, in so doing, improve motivation and attainment.”

Ann Mroz summed it up brilliantly in her leader, saying: “If we are serious about improving social mobility then it needs to begin (but not end) at an early age – when children are at primary school or even earlier.”