A major new international study highlights the mismatch between young people’s career aspirations and jobs, and the impact this will have on the world economy. The OECD study Dream Jobs? Teenagers’ Career Aspirations and the Future of Work is based on the latest PISA survey of 500,000 15-year-olds from 41 countries.

While the world of work has undergone huge changes since the first PISA survey was carried out in 2000, the results show that the career expectations of young people have shifted little over this period. Surprisingly, they have actually narrowed. Now, more young people than before appear to be picking their dream job from among the most popular, traditional occupations, like teachers, lawyers or doctors. And their choices are heavily influenced by gender and social background.

“Too many teenagers are ignoring or are unaware of new types of jobs that are emerging. The analysis suggests that, in many countries, young people’s career aspirations increasingly bear little relation to actual labour market demand,” says Andreas Schleicher, OECD’s Director of Education and Skills. 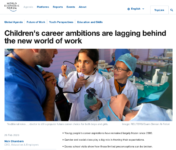 There are noticeable differences by gender and background. Among high performers in mathematics or science, boys in the study were much more likely to express an interest in becoming science or engineering professionals than girls. The reverse was true for health-related careers. The most advantaged high performers are more than twice as likely to anticipate having a job at a professional or managerial level as equally able but disadvantaged students. Among high performers, more males than females expect not to complete higher education and do not expect to have a professional or managerial job.

And teenagers’ career aspirations are similar to those of primary-aged children. The Drawing the Future study asked children aged 7-11 in 20 countries to draw a picture of the job they wanted to do when they grew up. The findings published during the World Economic Forum’s Annual Meeting 2018 showed that gender stereotyping is visible from a young age and is a global issue.

It is vital that young people don’t rule out options because they believe, implicitly or explicitly, that their future career choices are limited by their gender, ethnicity or socio-economic background. Children often base their aspirations on the jobs their parents, friends and neighbours do, and on TV and social media. Young people need to be given the opportunity to meet a wide range of people from the world of work who can help bring learning to life and show them how the subjects they are studying are relevant to their futures. If they don’t know what opportunities are out there – if they have never seen a scientist or an engineer, a male nurse or a female firefighter – how can they aspire to such jobs?

For this reason, and to mark the 50th anniversary of the World Economic Forum, the UK-based charity Education and Employers, in partnership with the Swiss NGO MOD-ELLE and with support from Deloitte, organised for 50 participants to visit the Davos primary and secondary schools and meet the students.

In the primary school, the children, aged 9-12, had drawn pictures of the job they wanted to do when they grew up. Delegates went into different classrooms and answered questions from the children about their job and career route. Questions such as “What was your favourite subject at school? What was your first job? What’s the most difficult thing about your job? Does your job make a difference to people?” The question and answer sessions all took place in German and for the guests who didn’t speak the language, parents, and in some cases, some of the older children acted as translators.

The secondary school event began with the launch of the OECD’s Dream Jobs report by Andreas Schleicher. As well as the PISA data, the report, written in collaboration with Education and Employers, featured quotes from young people. For the launch, the Davos students aged 13-15 were asked to write a letter about their views on the future of the world, the issues that matter to them and their own career aspirations. The need to tackle climate change, international conflict and poverty emerged as consistent concerns. Some of their letters can be seen here.

The Forum participants visited classrooms and discussed the letters with students, shared their insights and experience in areas including science, environment, technology and equality, and answered questions about their job and career route.

Research has shown such a simple action of going to visit a school and chat to young people can have a significant impact on their lives. Martin Flütsch, Principal of the Davos schools, said after the visits: “There is no doubt that it will change the future direction of some of our students’ lives. It is true that ‘You can’t be what you can’t see’ and the visitors helped broaden their horizons, raise their aspirations and challenged ingrained gender stereotypes. They helped get them excited about the subjects they are studying and motivated them to study harder and try their best to achieve their potential.”

By Nick Chambers, CEO of Education and Employers