Children in the US are drawing more women scientists than in previous decades, according to a new study by researchers at Northwestern University in the United States. They have analysed five decades of “Drawing the Scientist” test designed to investigate children’s perceptions of the scientist.

When asked to draw a scientist, less than one per cent of children in the 1960s and 1970s drew a woman. This rose to 28% between the 1980s and present day. However, children are still far more likely to draw a traditionally male figure when asked to depict a scientist.

The researchers believe the underrepresentation of women in several science fields does have an impact on the number of children drawing a female scientist. The findings also showed that media stereotypes play a significant role in children’s images of scientists as they get older. Where it was possible to determine detailed characteristics, many of the scientists in the drawings wore lab coats and glasses. On average, 79% were Caucasian.

The findings of this study confirms Education and Employers’ recent report Drawing the Future, where the researchers showed a clear pattern of gender stereotyping across a range of jobs selected by children. The report showed that children aged 7-11 hold biased views on who they want to become when they grow up and this is mainly influenced by who they know and who they have seen on the media.

Read more about the new study published on BBC here.

Watch a movie about Drawing the Future here.

Some the children’s drawings from our Drawing the Future report: 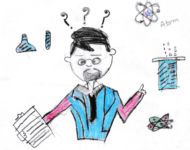 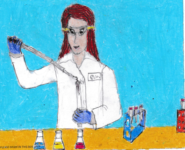 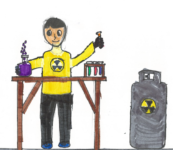