OECD has launched their new report The Future at Five: Gendered aspirations of five-year-olds. Based on the 30 most popular job preferences of 4,000 children in England and Estonia, the report looks at the extent to which children’s early aspirations are affected by gender stereotypes.

The report shows a significant presence of gender norms among five-year-olds. A quarter of the 30 top job roles chosen by girls were traditionally female-dominated roles, with over half of those chosen by boys being traditionally male-dominated. While more girls picked jobs associated with caring for others, more boys tended towards jobs in construction and transport. When it came to STEM, boys and girls from advantaged backgrounds were equally likely to choose these roles – though more so than those from disadvantaged backgrounds. However, overall the report did not show a strong influence of socioeconomic status when it came to choosing preferred job roles at this age.

Gender stereotypes were most apparent among boys, who were also more heavily influenced by their family background. Most of the children aspired to jobs they were familiar with, learning about them through their family, their community, TV, films or books.

Like our 2018 Drawing the Future report, which found that gender stereotyping exists from a young age, this research demonstrates the need to expose children to a wide range of role models in jobs that challenge stereotypes. 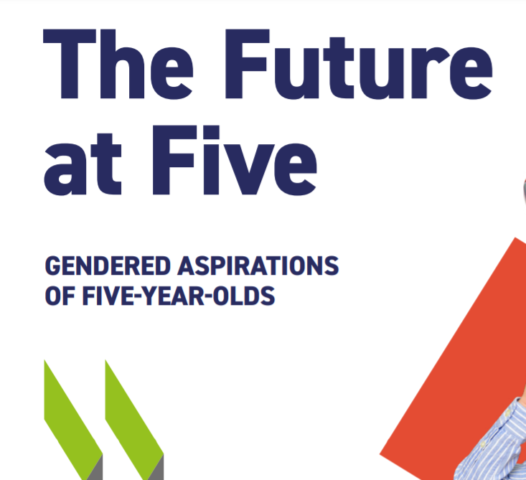 To mark the launch, on International Women’s Day OECD hosted a webinar discussion on how education systems can tackle gender stereotypes at a young age. Andreas Schleicher, Director for the Directorate of Education and Skills at OECD, presented on the latest data from IELS and what it means for education, which was followed by a panel discussion with experts working in the field of gender equality.

At Primary Futures we have recently created a new pre-recorded resource to help KS1 and Y3 children to tackle gender stereotypes, accompanied by learning resources. Watching the video, children consider what a builder or florist might look like before meeting Kimberley working in construction who takes us on a mini tour to meet her female colleagues onsite, including a bricklayer, dumper roller driver and highway engineer. Then children meet Jonathan, a celebrity floral designer who shows us how to create a simple arrangement as he tells us how his hobbies and love for nature led to his job.