The book is available here. 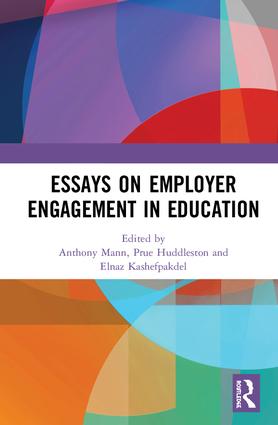 Recent papers by Mann and Percy (2013) and Kashefpakdel and Percy (2016) have used statistical analysis to identify wage premiums accruing to young British adults linked to experience of school-mediated employer engagement in education activities. Both studies have sought to explain premiums by drawing on conceptualisations rooted in theories of social capital. Specifically, both papers have drawn on Granovetter’s (1978) insights that economic advantages can be related to the nature of social networks possessed by an individual with benefits being related especially to possession of networks which are broad and varied in character: the strength of weak ties. Studies of the impact of employer engagement in education, consequently, raise important questions on the interrelationships between ‘proxy’ social capital accessed and enabled through schools and ‘real’ social capital accessed through family and friends. Specifically, this chapter asks: To what extent can state schools and colleges replicate the functions of family-based networks? Can schools compensate for comparative weaknesses in such ‘real’ networks? Or alternatively, do they serve to extenuate inequalities? The chapter explores directly the extent to which the education system possesses the capacity to channel and enhance teenage accumulations of social capital in order to challenge systemic social inequality.

It has long been understood that the social context within which a young person exists can influence the outcomes they enjoy through childhood and adult life. Conceptualised as social capital, over recent years the idea has attracted the interest of policy makers and researchers interested in understanding the comparative success of young people within both education and transitions into ultimate employment. Understood as a phenomenon which exists essentially within social relationships, social capital is conceived of as a resource in which individuals may wittingly or unwittingly invest in order to gain later benefits (Raffo and Reeves, 2000). Within the realm of careers provision, scholars and policy makers have identified aspects of employer engagement in education as a means of influencing the access of young people to forms of social capital, especially ‘bridging social capital’ whereby individuals with different social and economic experiences are connected, enabling access to new information and experiences (OECD, 2001). This chapter explores the role of schools and colleges in facilitating access to social capital and compares its importance to forms of social capital enabled through familial networks and with the impact of both phenomenon on the economic outcomes of young people from different socio-economic backgrounds.

In the study, the authors explore the relationship between access to school-mediated forms of social capital and outcomes related to its possession in the social context of the recipient. Drawing on the data from the British Cohort Study, the authors build on earlier work by Kashefpakdel and Percy (2016) which demonstrated links between adult wage premiums and teenage participation in school-mediated career talks. In that work, data were collected concerning the participation of young people between the ages of 14 and 16 in ‘career talks with people from outside of school’ which is used as a proxy for employer engagement activities.

Data on other factors including academic ability and parental social class are also collected from birth to age 26. It is these data which allow the hypothesis to be tested that access to information and insights via a social network mediated by schools could in fact compete with access to social capital provided by family and friends. This test is made possible by two questions in the 1986 survey: young people were asked at age 16 whether

The data set provides information on participants’ income at age 26 and other detailed information concerning background, gender,academic attainment, early home learning environment and level of deprivation at the local education authority level (LEA). Availability of the data facilitates a comparative analysis between cohorts that had access to real social capital versus cohorts that accessed only proxy social capital while controlling for extraneous variables that could mask the accuracy of the findings from the statistical analysis.

The authors outline key results from the regression analyses based on the hypotheses they set out to test. First, they explore the association between teenage confidence in a network of friend and family to help get a job after school and income at age 26. Regression analysis of all participants (N=1,234) reveal participants who, at age 16, reported confidence in having real social capital earned on average 4.3% more wages as adults than their comparable counterparts who did not have confidence in receiving support from family and friends to secure a job. Participants reporting real social capital were predominantly from more advantaged social backgrounds.

The second analysis focuses on participants in the survey who lacked real social capital (and were drawn from more disadvantaged social backgrounds), but who took part in school mediated career talks at ages 14-15 (N=691). The analysis shows that engaging in school mediated career talks as teenagers from outsiders received an average of 8.5% wage more than their peers who believed their social network will help them secure jobs at age 26.

In contrast, analysis among participants (N=481) who declared real social capital revealed and also took part in career talks, shows that there was no significant increase on later earnings in relation to their engagement in such school-mediated activities.

Further, the access to career talks by disadvantaged teenagers compensates the absence of real social capital. Through such engagement with members of the economic community Raffo and Reeves (2000), Mann and Percy (2014), Stanley and Mann (2014), Jones et al. (2016) and Erickson et al. (2009) have argued that disadvantaged teenagers gain insight to what Granovetter (1973) labels ‘non-redundant, trusted information’ about jobs and careers. While this does not necessarily mean receiving help in securing jobs, it does provide resource of value. The analysis shows that access to school mediated career talks at ages 14-15 are most strongly related to increased wage premiums among teenagers from lowest economic backgrounds. Analysis found, moreover, no evidence for increased wage premiums among participants who had confidence in accessing real social capital to secure a job.

The chapter questions whether schools can intervene in the lives of young people to enhance their access to social capital of ultimate economic value – and finds that they can. Comparing a family-based ‘real’ form of social capital with a school mediated ‘proxy’ form, it is seen that those who lack real social capital gain higher average wage returns from school mediated social capital than their more advantaged peers gain from their family-based ties, once academic achievements, background characteristics and local environment are controlled for. The comparison suggests that it is access to reliable, authentic, diverse sources of new and useful information about the labour market (‘nonredundant trusted information’) that drives change.

It is telling that among young people with useful family-based ties, the wage premium correlated with school mediated activities was no longer significant. This suggests it is young people from lower socio-economic groups whohave most to gain from participation in school-mediated careers talks. In this way, the careers intervention can be seen to close the gap in adult economic outcomes. By consequence, the results suggest that policy makers intent on reducing social inequalities should prioritise such activities on those young people possessing the weakest social networks. Taking advantage of the willingness of individuals to volunteer to provide careers talks in schools, schools can be imagined as turning an archetypally private resource (possession of expert knowledge about discrete elements of the labour market) into a public one. The study suggests, consequently, that government, schools and other public actors have it in their power to harness and channel (or in other words, socialise) such social capital as a mechanism to compensate, in some part, for preceding levels of inequality.

OECD. 2001. The Well-being of Nations: Human and Social Capital. Paris: Organisation for Economic Co-operation and Development.

Stanley, J. and Mann. A. 2014.  “A theoretical framework for employer engagement” in Mann, A., Stanley, J. and Archer, L. eds. Understanding Employer Engagement in Education: theories and evidence. London: Routledge.