In January 2022 the Education Select Committee announced it was holding an inquiry into the effectiveness of the careers advice given to students – a root and branch review of how well the current system for careers education, information, advice and guidance is working.

The Education and Employers charity submitted written evidence to the Committee and its CEO Nick Chambers was invited to provide oral evidence to the fifth session of the inquiry which took place on the 10th January 2023.

Watch the full recording of the Education Committee meeting.

The evidence provided demonstrated the impact of the Education and Employers’ Inspiring the Future and Primary Futures programmes, operating in secondary and primary schools respectively. The programmes have been designed to make it easier for teachers to connect with volunteers who can help bring real-world experiences to the curriculum and careers learning through a range of interactive activities. It has enabled over three million encounters between young people and the world of work, with over 11,000 schools registered.

Nick referenced Education and Employers’ research into careers and employment engagement spanning the last 14 years and including over 70 reports.

The research shows that employer engagement in education helps to:

The Education and Employers report “It’s who you meet: why employer contacts at school make a difference to the employment prospects of young adults”  published in 2012 showed the impact of employer engagement on young people. The research, which forms part of the Government’s careers strategy and Gatsby Benchmarks, was based on a survey undertaken pro-bono for the charity by YouGov which asked young adults aged 19-24 about their current employment status and to reflect on their experiences of the world of work whist they were at school. The findings were striking: 26.1% of young people who could recall no contact with employers whilst at school went on to become NEET. This reduced significantly to 4.3% for those who had taken part in four or more activities involving employers (career insights, mentoring, work tasters, work experience etc.)

The evidence provided to the committee focused on the impact at primary, based on the charity’s research findings in the following reports:

Nick also discussed the Primary Futures programme which was launched in 2014 in partnership with the National Association of Head Teachers with the aim of widening the horizons and aspirations of primary school children by helping them make the connections between their lessons and their futures. 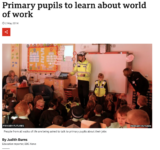 Since Primary Futures’ launch, 9,461 primary teachers have signed up to join the programme and in the last two years alone 500,000 children have had the opportunity to meet a wide range of volunteers. Volunteers have included two former chairs of the Select Committee, four Secretaries of State for Education and six Education Ministers. The programme has also been replicated by other countries and has been endorsed by three Prime Ministers.

To find out more about the charity’s research, access the Education and Employers online library.